I just love a good history lesson. Not the boring dates and endless facts you learned in High School, but the good stuff. The stuff that connects us. What makes our modern lives relatable to theirs? Tell me that. Don’t stop at what they accomplished. Dig deeper into the backstory and reveal what could be the “why”. It’s usually hidden behind the who and the what…Look at it from different points of view. If you do that, then history lessons cease to be tedious stories and begin to breath with life. You see our human connections and your heart can exclaim “Me too!”  This back-story you may never have heard, but as a photographer and artist, I found it to be wildly fascinating.

Bonnie Parker and Clyde Barrow…. Two of the most notorious criminals in American History. Bonnie and Clyde were already a news story sensation but it was their conceptual portraits that solidified their place in the national spotlight and the history books. These two recognized the power of a story image and they had a definitive story to tell. They staged their images using what they believed were status symbols… stolen Ford’s, firearms and fashion. Together, with their dashing good looks, facial expressions and body language that would rival any movie star and a Kodak Brownie Box, they tell a pretty-powerful-good story. 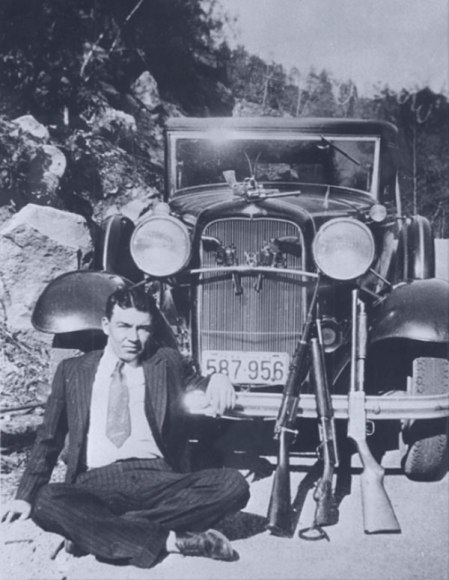 The following image descriptions are taken from the book “Chilling Historial Crimes: Volume 1” by Wallace Edward. Mr. Edward’s words are a perfect narration. If you get into the details of each image, you could almost mistake his words for instruction in a conceptual portrait master class.  I hope, as conceptual photographers and portrait artists, we can be inspired by all the wonderful little details that make these images such good examples of conceptual portraiture. You may look at these images and see sadness, ignorance and heartache or you may be inspired by their charm and youthful energy. Either way, as a photographer who is striving to be a master-story teller, it just doesn’t get much better than this.

“One snap shot showed Bonnie pretending to disarm Clyde, holding him at arm’s length while aiming a shotgun at his chest. Clyde had tilted his hat back in a boyish manner, and his dimples gave him away – he looked at her a little wearily, a little lovingly, obviously amused by her prank.” (Image first published here…) 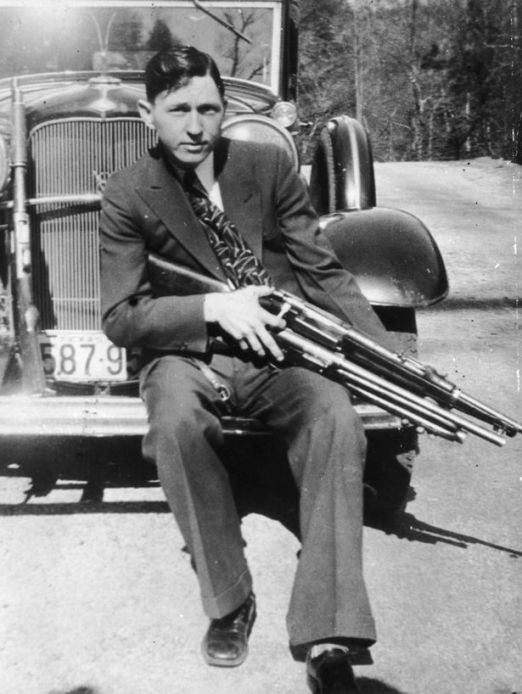 “He sat on the front bumper of a car in another photo, displaying two firearms (nearly as big as he was) across his lap. Both Bonnie and Clyde had an actor’s flare, adding to the intrigue spreading from city to city.” (Image first published here…)

“For one photo, Bonnie stood with her hands on her hips and two pistols tucked in a belt around her thin waist; she wore a light-colored blazer over a form-fitting skirt that day. She often wore the same Mary Jane shoes, high heels with a thin strap that she buckled around each ankle.” (Image first appeared here…)

“One photo in particular churned the rumor mill into full gear; Bonnie stood with a fat cigar in the right corner of her mouth and a pistol at her hip. She looked tough, seductive, and dangerous. Standing in front of the Ford, she leaned forward slightly, with her left elbow resting on a headlight. She propped her left foot up on the front bumper and jutted her elbows out to either side, like spread wings, similar to the flying goose radiator cap hood ornament to her left.” (Image first appeared here…)

“Other photos illustrated the love the brothers felt for their women. Buck sat on the runner of a car in one print, wrapping his arms around Blanche, who was seated on his lap. Bonnie and Clyde stood arm in arm in another photo, looking very much the sweethearts they were.” (Image first appeared here…)

“All in all the more surly snap shots boosted the gang’s notorious image in the public’s eye. There was no doubt that they were desperate and dangerous and on the move. As their infamy grew, Bonnie Parker became the trigger-happy starlet riding shotgun alongside the dapper and dangerous Clyde Barrow. He dressed like the gangster legends of the silver screen, but he was the real deal. In reality, he and the others become increasingly rumpled and dirty from life on the road.” (Image first appeared here…)

Want to join the “Sharing It Forward” community?  Register to receive all the stock, blog posts, tutorials, tips and tricks delivered right to your in box so you don’t miss a thing! All community members will receive a free stock pack of Butterflies you can use freely in your conceptual portraits. No restrictions.

Want to contribute? Shoot me an email! rutland.caroline@gmail.com – I’m always looking for like-minded artists who are willing to share what they have learned. If it is something we have not covered before I will share it on this blog, with a link back to your portfolio, website and social media!